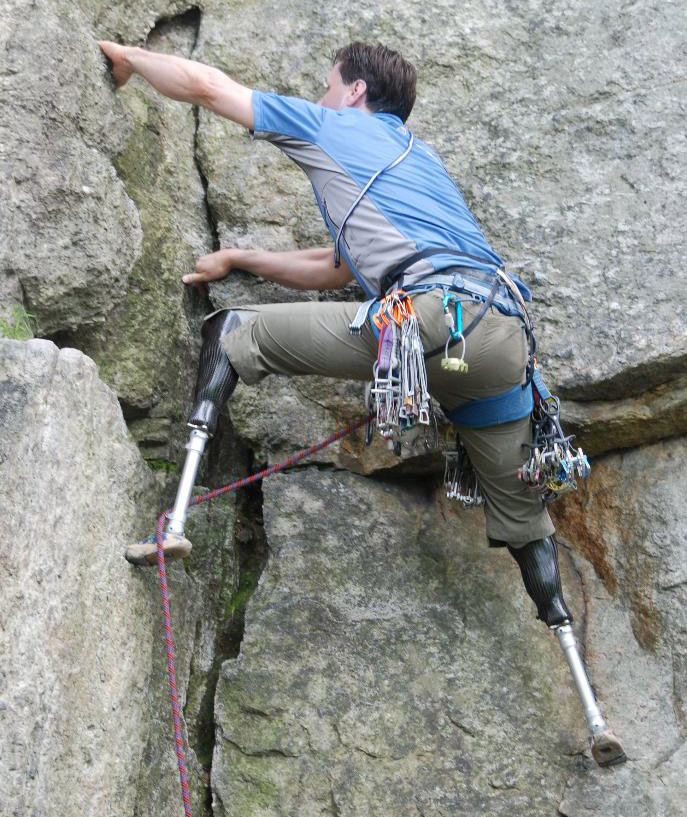 The Mobility Saves Project was initially created to showcase a major study commissioned by the Amputee Coalition and conducted by Dr. Allen Dobson, health economist and former director of the Office of Research at CMS (then the Health Care Financing Administration), which shows that the Medicare program pays more over the long-term in most cases when Medicare patients are not provided with replacement lower limbs, spinal orthotics, and hip/knee/ankle orthotics.

Lower extremity and spinal orthotic and prosthetic devices and related clinical services are designed to provide stability and mobility to patients with lower limb loss or impairment and spinal injury. Supplying bracing or support (an orthosis) where needed or a new artificial limb (prosthesis) when necessary saves our healthcare system significant future costs. Medicareâ€™s own data shows this to be the case. Timely treatment that preserves or helps regain mobility not only makes sense; it also saves dollars.

The studyâ€™s authors used the Medicare Claims database to review all Medicare claims data for patients with conditions that justified the provision of lower limb orthoses, spinal orthoses, and lower limb prostheses. The unprecedented study looked at nearly 42,000 paired sets of Medicare beneficiaries with claims from 2007-2010. The paired patients either received orthotic and prosthetic care or they did not get such care.

The studyâ€™s key finding was that Medicare costs are lower or similar for patients who received orthotic or prosthetic services, compared to patients who need, but do not receive, these services. According to the study, Medicare could save 10 percent ($2,920 on average) for those receiving lower extremity orthoses, and there also are modest savings for patients receiving spinal orthoses and lower extremity prostheses.

Due to recent advances in technologies, prosthetic knees and feet allow for more dynamic movements and improve user quality of life, but payers have recently started questioning their value for money. To answer this question, RAND Corporation simulated the differential clinical outcomes and cost of microprocessor-controlled knees (MPK) compared to non-microprocessor controlled knees (NMPK). They conducted a literature review of the clinical and economic impacts of prosthetic knees, convened technical expert panel meetings, compiled the input parameters required, and constructed and implemented a simulation model over a 10-year time period for unilateral transfemoral Medicare amputees with a Medicare Functional Classification Level of 3 and 4.

RAND found that compared to Non MPK, MPK is associated with sizeable improvement in physical function and reductions in incidences of falls and osteoarthritis. The effect on low-back pain, depression, obesity, diabetes, and cardiovascular disease could not be quantified due to the lack of data. The simulation results show that over a 10-year time-period, compared to NMPK, MPK is associated with an incremental cost of $10,604 per person and an increase of 0.91 quality adjusted life year per person, resulting in an incremental cost of $11,606 per quality adjusted life year gained. The results suggest that the incremental cost of MPK is in line with commonly accepted criteria for good value for money and with the incremental cost of other medical devices that are currently covered by U.S. payers.

Referencing the previously noted Dobson and DaVanzo study, this study reports on a parallel analysis based on claims from 2011-2014 and includes Medicare Part D drug claims in addition to Parts A and B. Its purpose is to validate earlier conclusions on the extent to which Medicare patients who received select orthotic and prosthetic services had less total health care utilization, lower Medicare payments, and/or fewer negative outcomes compared to matched patients not receiving these services.

The Bigger Picture: The Story of Mobility Saves

â€œLooking at full costs and other outcomes (including use of out-patient therapy, number of falls, ER admissions, and acute hospitalizations) over a 12-18 month period, our study concludes that patients who received the orthotic and prosthetic services experienced greater independence than patients who do not, with better or comparable health outcomes and generally lower Medicare payments.â€ 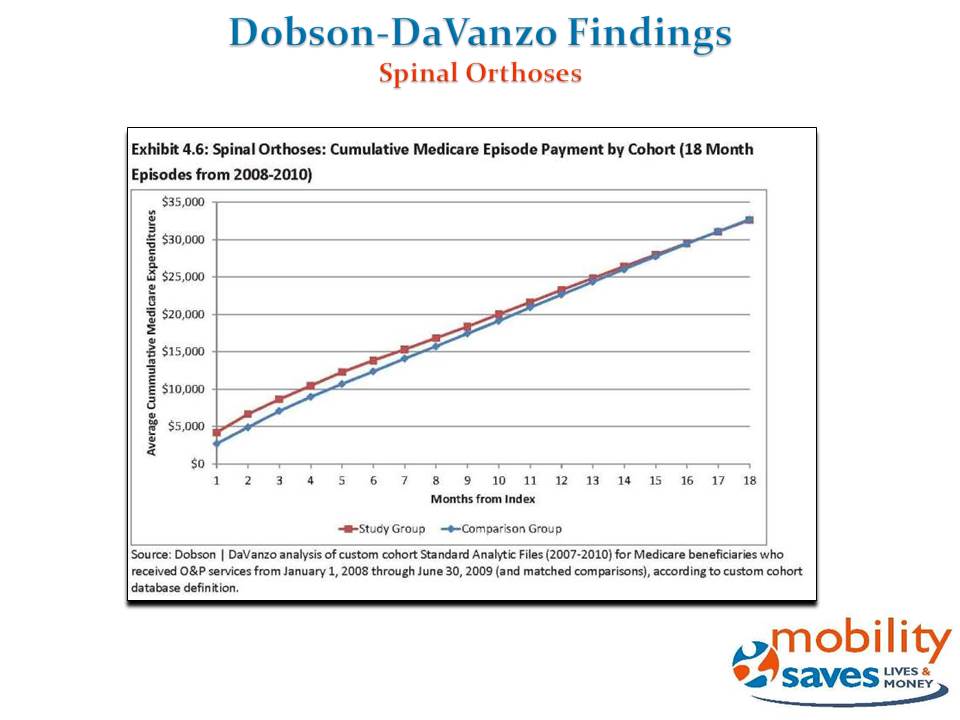 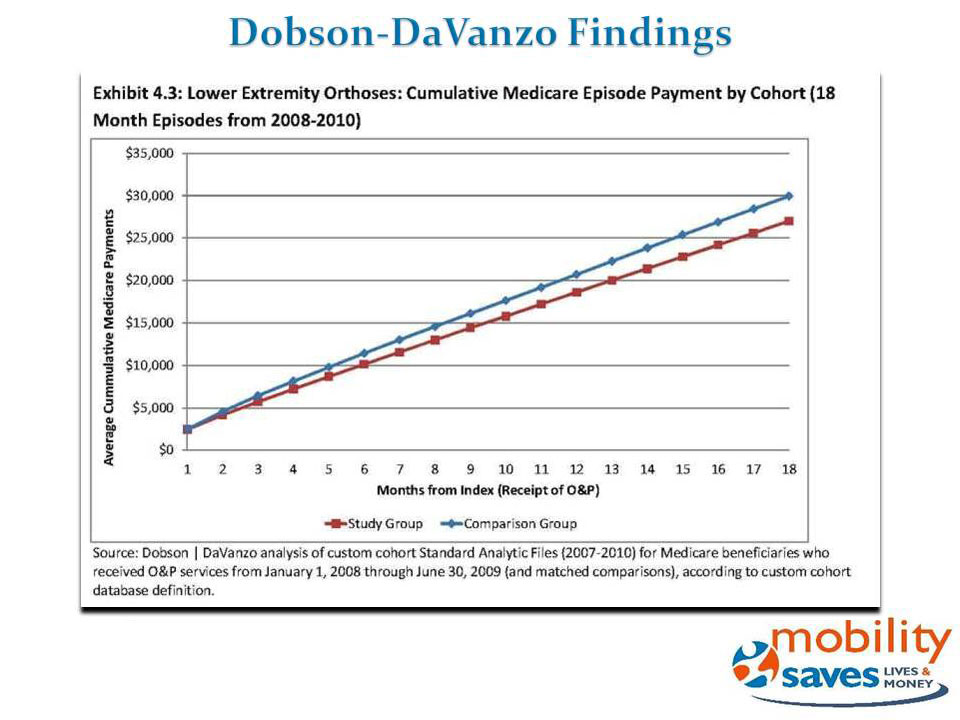 With respect to the prosthetic intervention, the cumulative cost comparison demonstrated that the cohort that received the prosthesis had about 1{cd9c44e368fb6cee2d09ae9816b0d094fbe47d90389af7031507558183226368} higher costs compared to the population that did not receive the device. The slope of the cumulative cost curve indicates that had the period of evaluation been longer the break- even would have been reached. 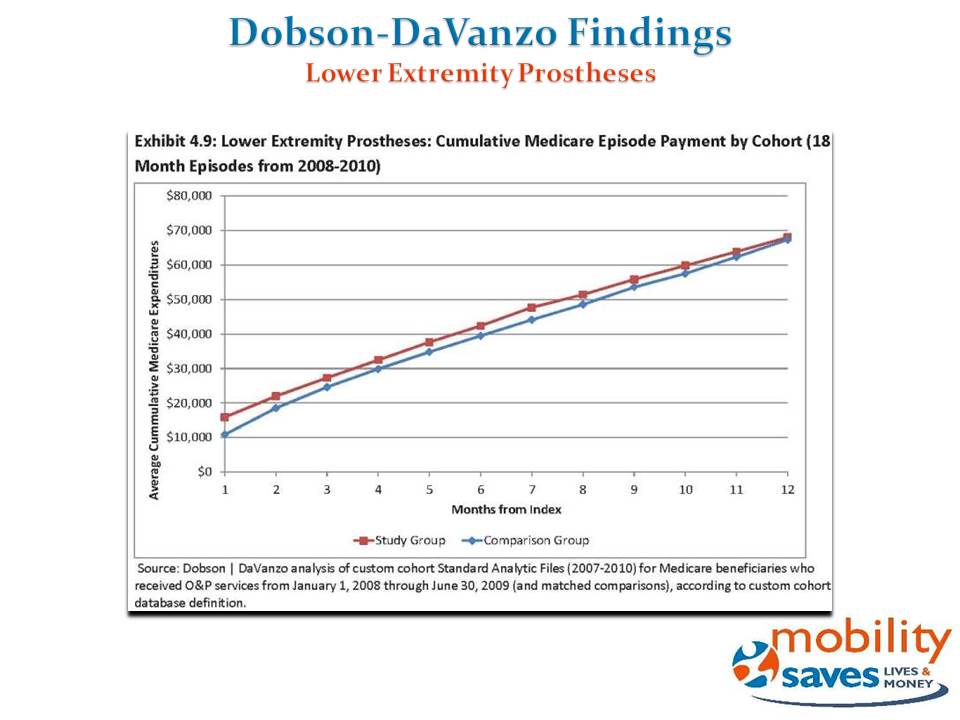 â€œEveryoneâ€™s experience with limb loss and limb difference is unique. However, access to medically appropriate devices can dramatically change that experience, providing an avenue for a more active, engaged life in the community and the workplace. This study offers national data that provides support for the need for access to care â€” as well as pointing out the opportunity to further explore the impact prosthetic devices can have, both financially and personally.â€