In addition to scheduling 78 meetings for attendees with their Congressional Members and staff on the Hill on April 17, the Amputee Coalition held a training event the day prior to inform attendees of its legislative priorities and the asks they would be making during their meetings the following day. Ashlie White presented on the research studies that show increased quality of life and cost-effectiveness for patients who receive prosthetic intervention. Ashlie also presented on the provisions of the Medicare O&P Improvement Act (S. 1191/H.R. 2599) 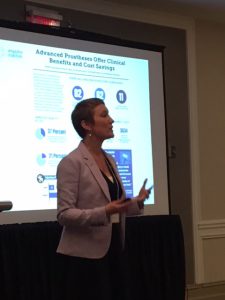 The Amputee Coalition included S. 1191/H.R. 2599 as one of its main legislative priorities for attendees to discuss during their Hill meetings. The Amputee Coalition emphasized that people with limb loss and limb difference deserve their prosthetic care to be provided by qualified clinicians.Â The Coalition supports adoption of a final regulation for BIPA 427 to ensure that only qualified providers are able to provide O&P Care, removing prosthetic and custom orthotic devices from the DME category to distinguish the unique rehabilitative nature of these 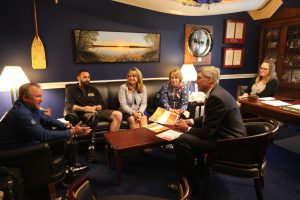 devices in comparison to DME supplies, and enacting the remaining provisions of the Medicare O&P Improvement Act.

As luck would have it, Tuesday was also scheduled the House Committee on Veterans Affairs Committee held a hearing on several bills, including the Injured and Amputee Veterans Bill of Rights (H.R. 2322), a Bill that has been championed by the National Association for the Advancement of Prosthetics and Orthotics (NAAOP). Several individuals with limb loss sat in the front row of the hearing as a sign of solidarity with Amputee veterans. AOPA included H.R. 2322 as one of its major policy initiatives during the 2018 Policy Forum in March, and was pleased to participate in the hearing on Tuesday. 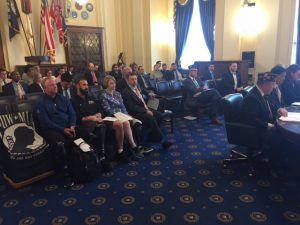 Nicole Ver Kuilen is no stranger to facing challenges and overcoming obstacles. In fact, it is central to her existence, as an athlete, as an advocate, and as a person living with limb loss. She has just completed a 1,500-mile triathlon down the West Coast. Along the way, she shared her own story, and advocated for legislative changes to improve healthcare coverage for prosthetic care.

Nicole was diagnosed with bone cancer when she was 10 years old. A few months after her first chemo treatment, her medical team determined that her leg would need to be amputated to save her life.

Learning to use a prosthesis is a challenge, but children are resilient, and Nicole was ready to get on with her new normal. That summer, Nicole was faced with a challenge that she didnâ€™t know how to overcome. â€œAll I really wanted to do that summer was go play in the water with my friends, but I learned that my leg wasnâ€™t waterproofâ€ said Nicole.

Growing up near the Great Lakes in Michigan, Nicole was looking forward to the summer tradition, playing in the water with her friends and going to the water parks. Even showering became a limitation. Her family wrote their insurance provider to request approval for Nicole to receive a waterproof prosthesis, so that she would not have to face these types of limitations for the rest of her life.

Insurance denied the request. â€œThey wrote back and said this is a convenience item, itâ€™s not medically necessary; so, we didnâ€™t really push it because we thought no meant no,â€ said Nicole. This was her first experience with being denied access to the prosthetic care she wanted and felt she needed. When she was 16, her high activity level was causing a lot of breakdown to her prosthesis, but Nicole was denied by her insurance company for a running prosthesis, despite her need for better technology to stay active.

â€œIt wasnâ€™t really until this past year that I really just got fed up with the system and the fact that I had been dealing with the same barriers over and over again for 16 years, said Nicole.â€ She was in the process of having a new prosthesis built and trying to find something that insurance would cover that would allow her to continue running half marathons and competing in bike races. â€œAfter jumping through all the hoops, 26 appointment and a year later, I basically had to settle for the same technology that Iâ€™d had for the past five years,â€ said Nicole.

Motivated by her own challenges with access to appropriate prosthetic technology and care combined with her growing awareness that so many others are unable to access the prosthetic care they need, Nicole launched ForrestStump.org and began planning the 1,500-mile journey, running, biking and swimming down the West Coast.

Nicoleâ€™s teammate and clinical support during the Forrest Stump journey, Natalie Harold, MSPO said, â€œI have to commend Nicole for the idea of Forrest Stump, because the whole goal wasnâ€™t out of a place of selfishness. She had faced the same barriers over and over for 16 years, but she didnâ€™t set out to get attention or raise money for herself. It was all bigger in scope.â€ 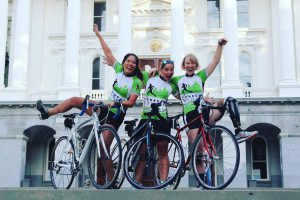 Natalie is new to the O&P profession, but wants to see more people living with limb loss get access to the appropriate technology for their prosthetic needs. â€œWeâ€™re not advocating for every amputee to get a running blade, because that is not appropriate for every amputee; weâ€™re only asking that the technology that is available be accessible, when appropriate, to all amputees,â€ said Natalie.

Watch the videos below or listen to the Podcast to find out more about Forrest Stump and Nicole’s experience on Capitol Hill.